My wife and I recently escorted a small exclusive group to Newfoundland and Labrador – one of Travel With Bradley‘s hugely popular excursions.  This was Gabi’s and my first trip to”The Rock” and the experience was spectacular – better than all the great things we’ve heard over the years – better than I ever would have hoped.

To begin, the trip was in August- July and August deliver the best weather according to the locals and they clearly know their stuff.  Aside from a few mildly overcast days, we only had rain the evening prior to our return home.  Blue skies, bugs-bunny clouds floating across the Atlantic Ocean, and the fresh smell of salt water breezes.  I grew up on the west coast of Canada and NL’s beautifully warm days and cool nights took me right back to my childhood. We toured the island, primarily the Avalon Peninsula in a motor coach for nine days, starting and ending our trip in St.John.  My lasting memories of the capital city will be the colourful”Jellybean Row Houses” and the George Street music scene.  We didn’t have time to see experience as much live music as we would have liked but seeing all the pubs, bars and restaurants situated in this entertainment district illustrates why Newfoundland has such a massive reputation for song writers, singers, musicians and entertainers like the Codco alumni. Listening to one of my favourite artists on earbuds, the late Ron Hynes, while out for an evening stroll on the same streets he walked was magic.  After obtaining a recommendation at O’Brien’s Music, on Water Street, I picked up Hynes’ CD, “Stealing Genius” to augment my library. 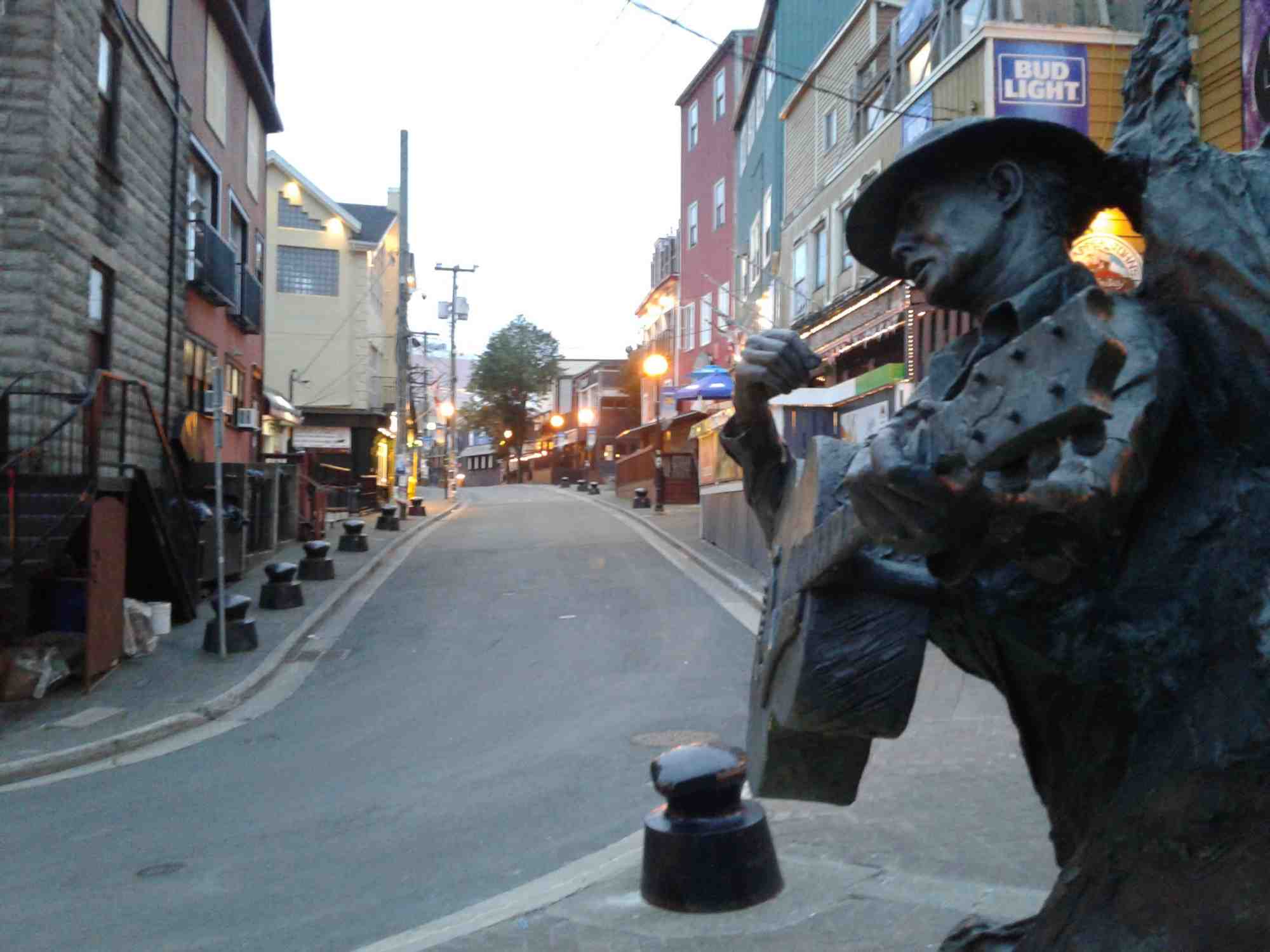 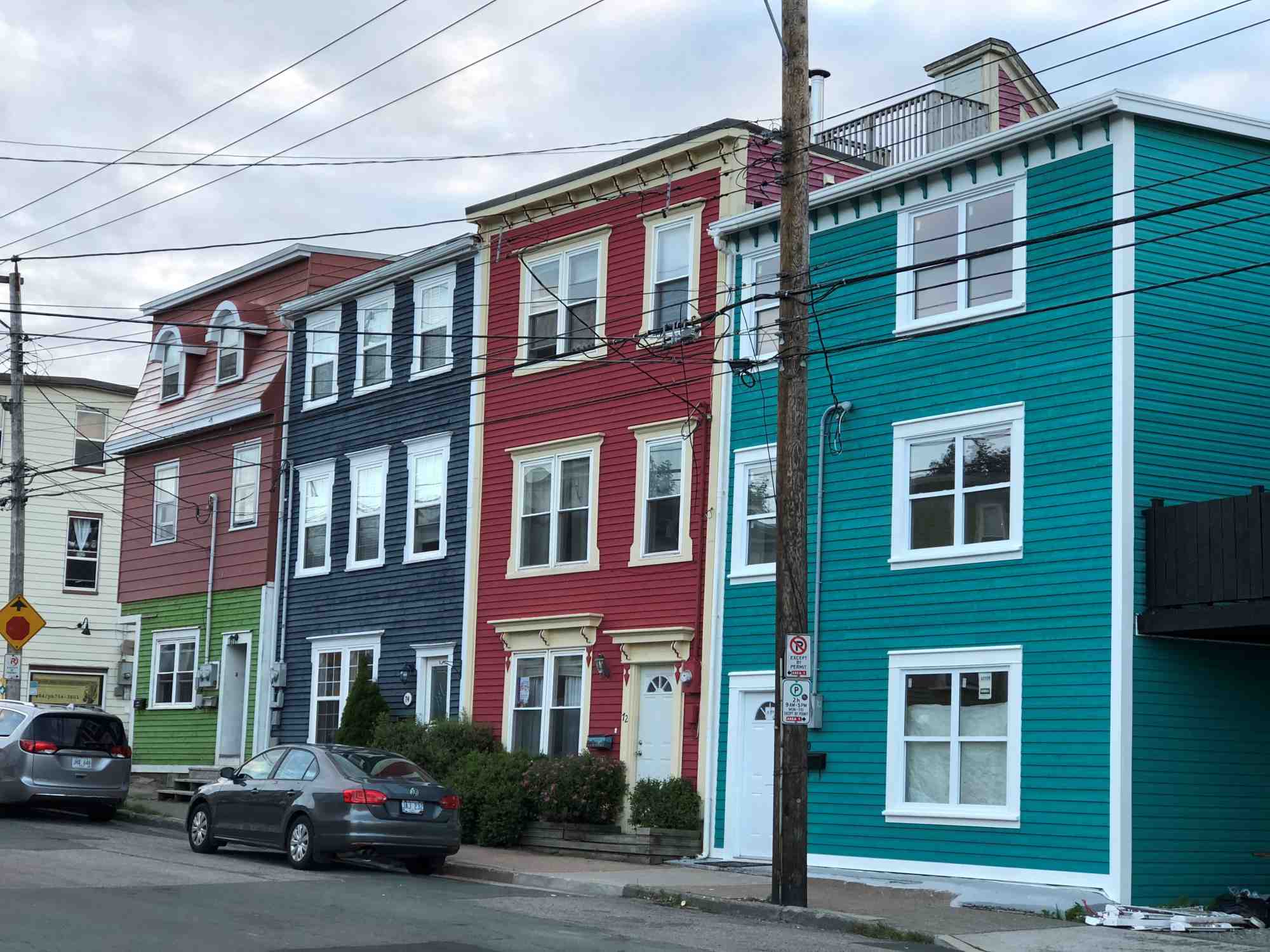 My parents were simple travellers, preferring scenery and people over all else – no wonder they loved Newfoundland and Labrador so much.  They only visited once in their long lives but never ceased referencing it.  As our group toured the peninsula, visiting the many unique out-ports, we never tired of the rugged shoreline and cliffs, the vistas of endless sea and the quaint communities with their clapboard houses seemingly placed helter  skelter overlooking the bays.  And Newfoundlanders always live up to their reputation for friendliness and are always quick with a joke or a tease.  Their self-deprecating sense of humour is endlessly disarming, but they’re at their best when they reel you in with a windy.  By the end of the trip, our group waited in anticipation for the final reveal. 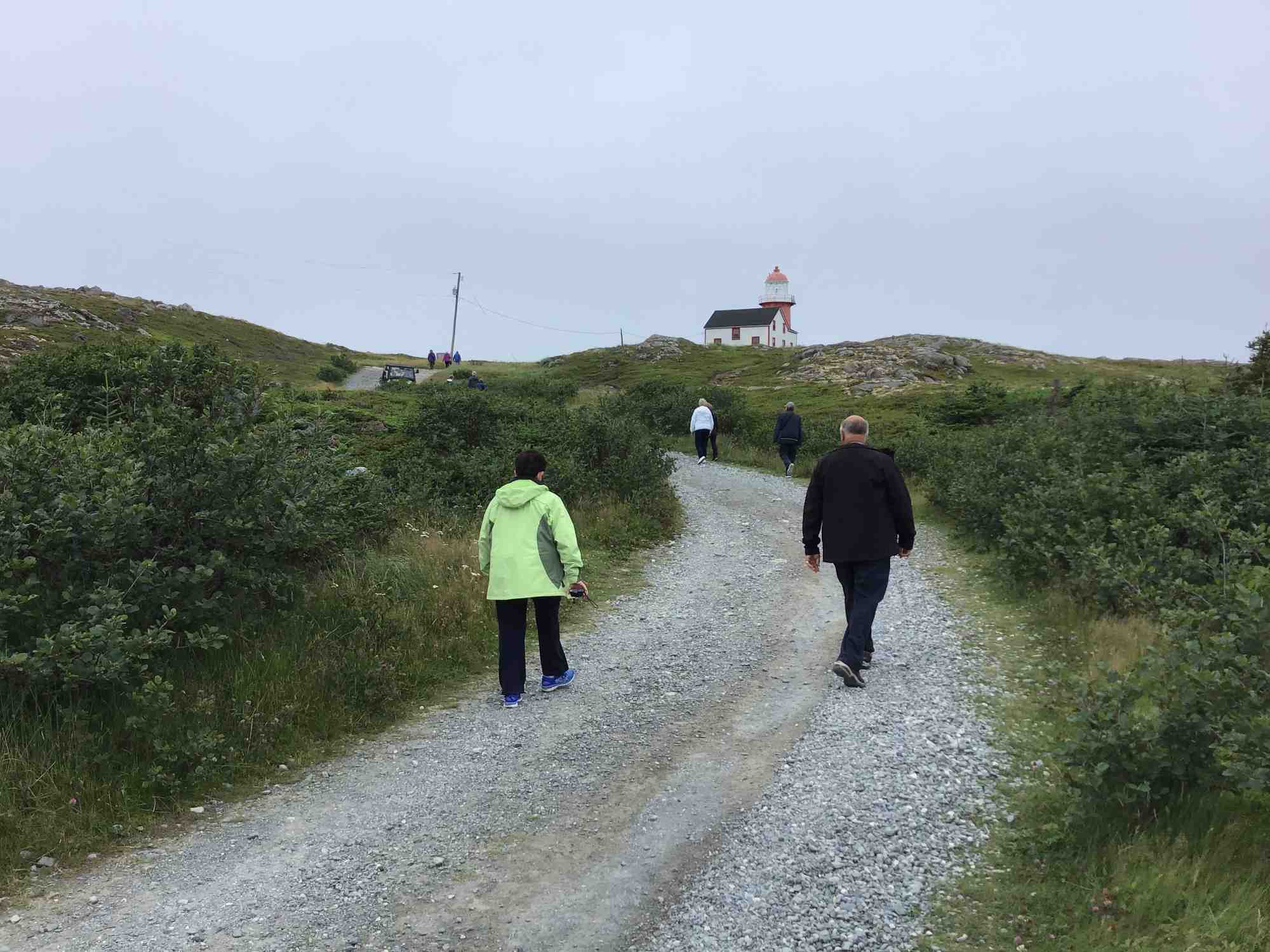 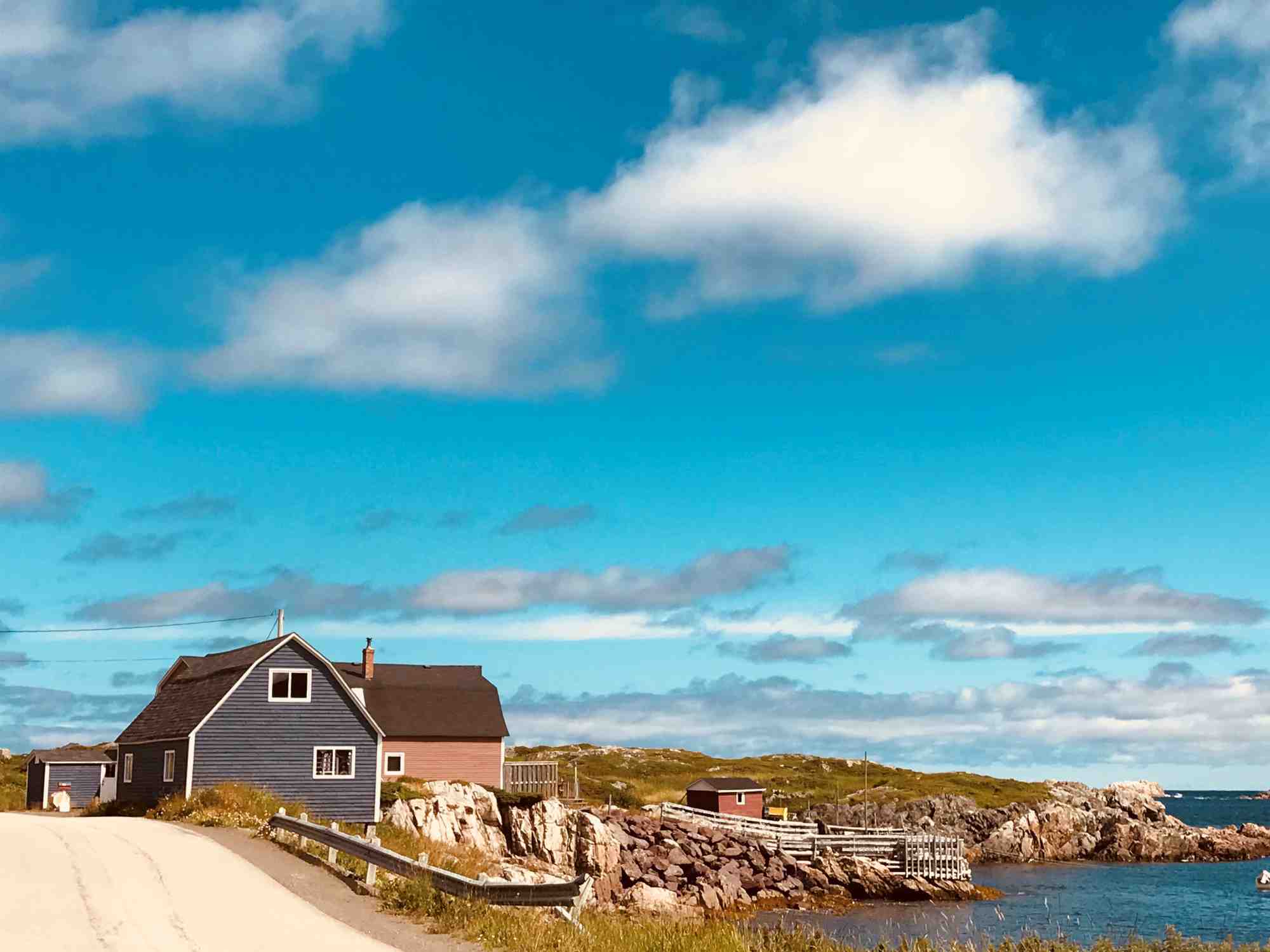 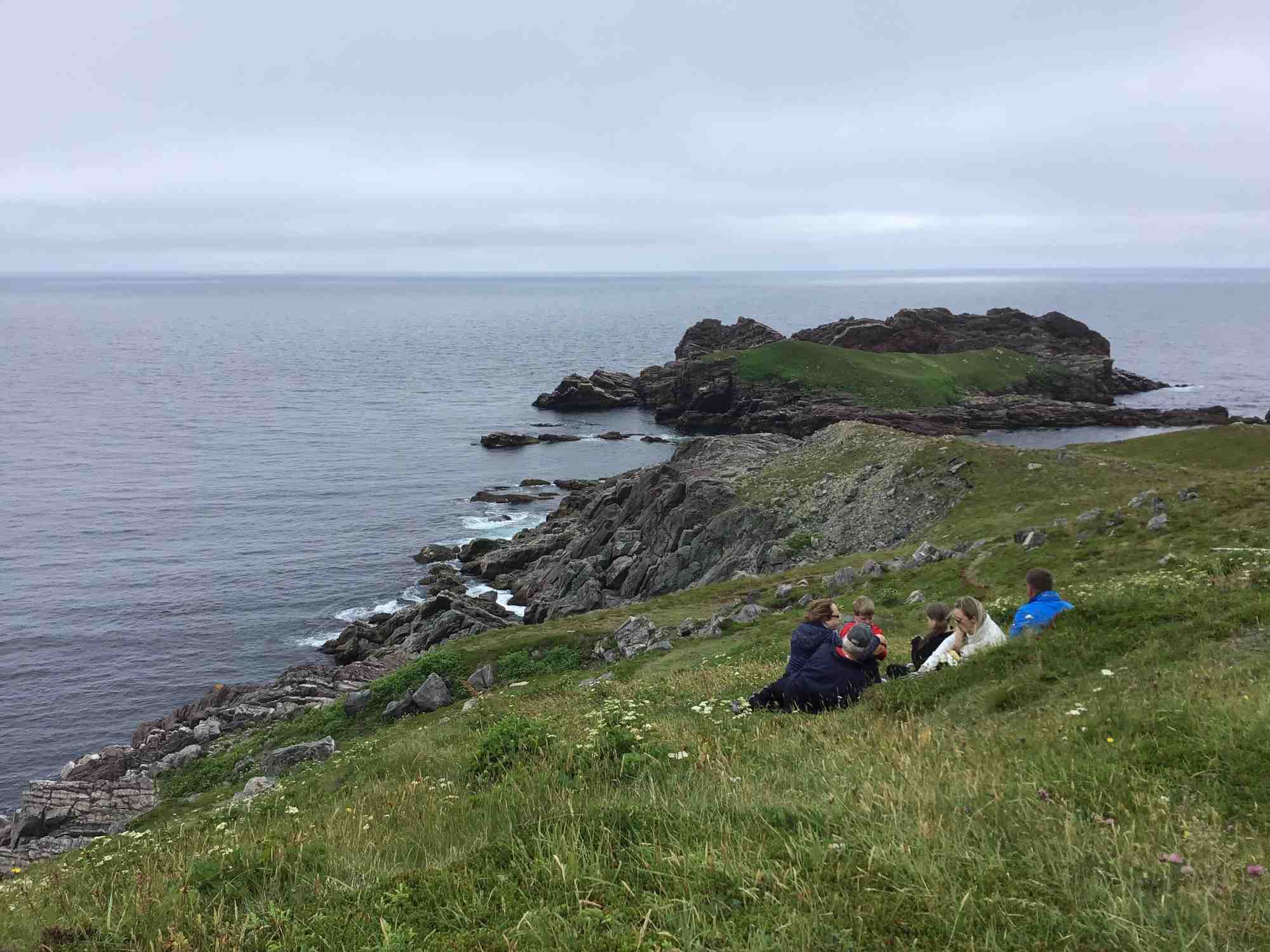 In addition to the scenery and people, the food – especially the seafood, not surprisingly – will also be one of my lasting memories.  Gabi and I still debate what was the best meal:  Lobster in Bay Bulls, Crab cakes and Cod (we Newfoundlanders simply refer to it as fish, lol) in Happy Adventure, Fishcakes in Cupids, Chowder in Twillingate, or Atlantic Salmon in Bonavista and Honey Dijon Salmon in Gander, and then more Atlantic Salmon and Cod in Trinity, Gander and, of course, St. John -twice!.  We even trekked into the Ferryl and Lighthouse for a picnic on the bluffs overlooking Minke whales breaching the surface.  That’s what I call dinner and a show! 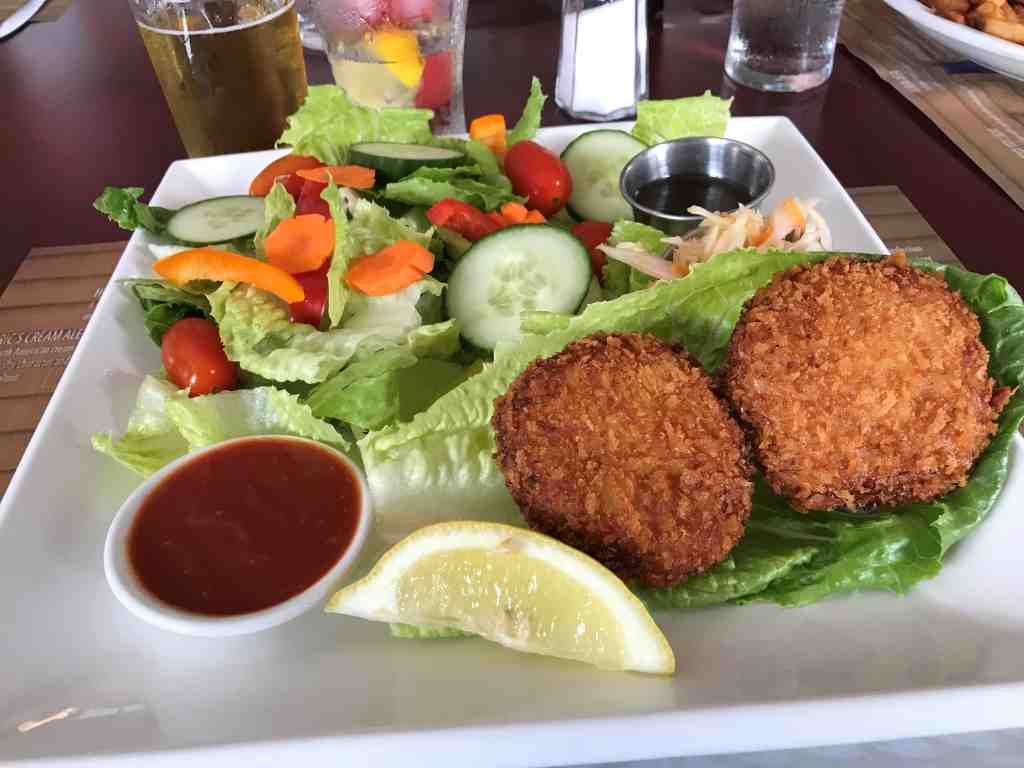 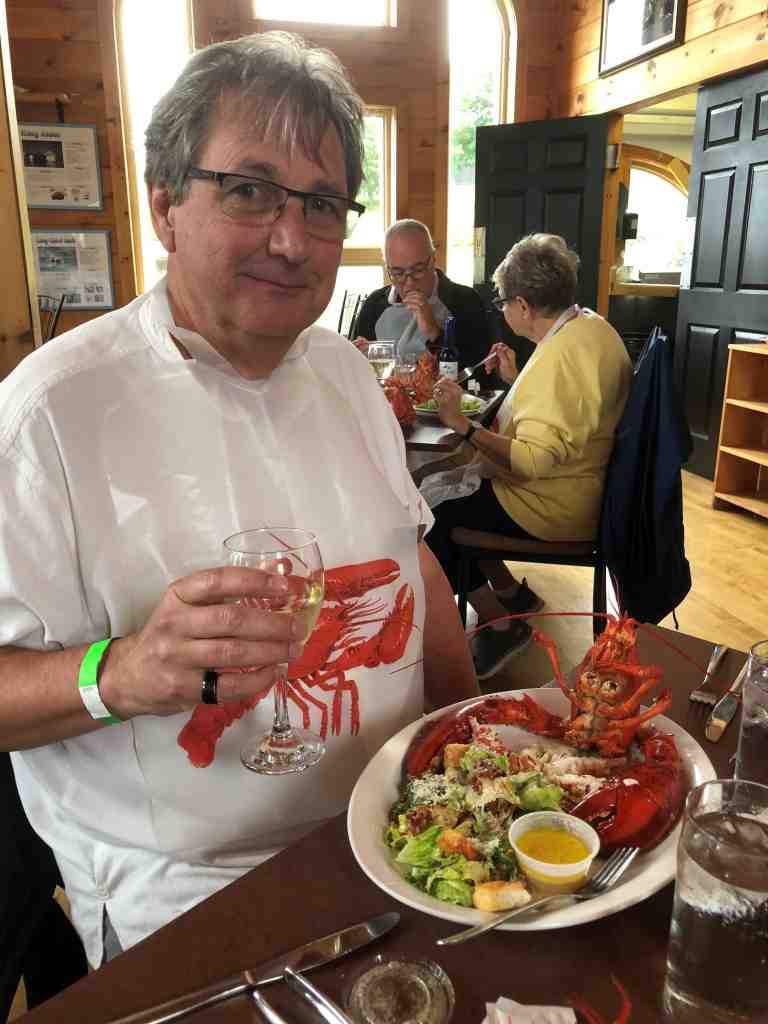 There were two impromptu side trips during our journey that require mentioning – surprises are always part of every good vacation and they both happened the same day on our way to Twillingate.  The first was when we detoured to Boyd’s Cove Interpretation Centre which pays homage to the region’s original people – the now-extinct Beothuks.  If you ever visit, make sure you take in the Spirit Garden. The second surprise was getting off the main road and taking a “very short” walk through the tiny out port of Little Harbour, where we immediately happened upon one of the local fishermen salting and drying cod on his clothesline.  At the other end of town we ran into Harry Pardy, who in retirement makes handmade models of fishing boats. To me, Newfoundland and Labrador’s most iconic image is that of fishermen in a dory on the wild Atlantic pulling in their catch.  That’s the model I chose and the memento of our adventure on The Rock that holds a place of prominence in my house to continually remind me of it all – the music, the Jellybean Houses, the scenery,the food and the people. 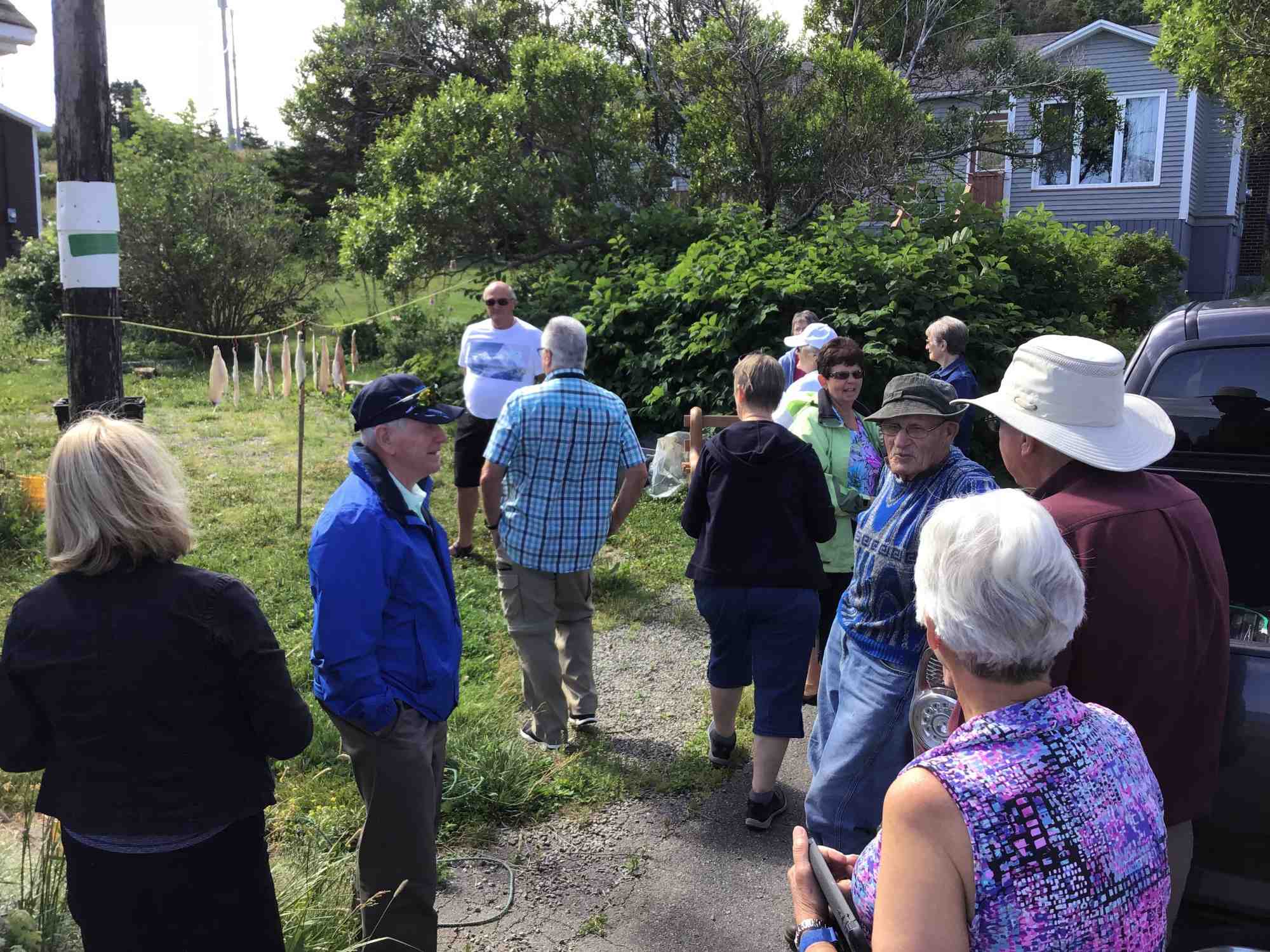 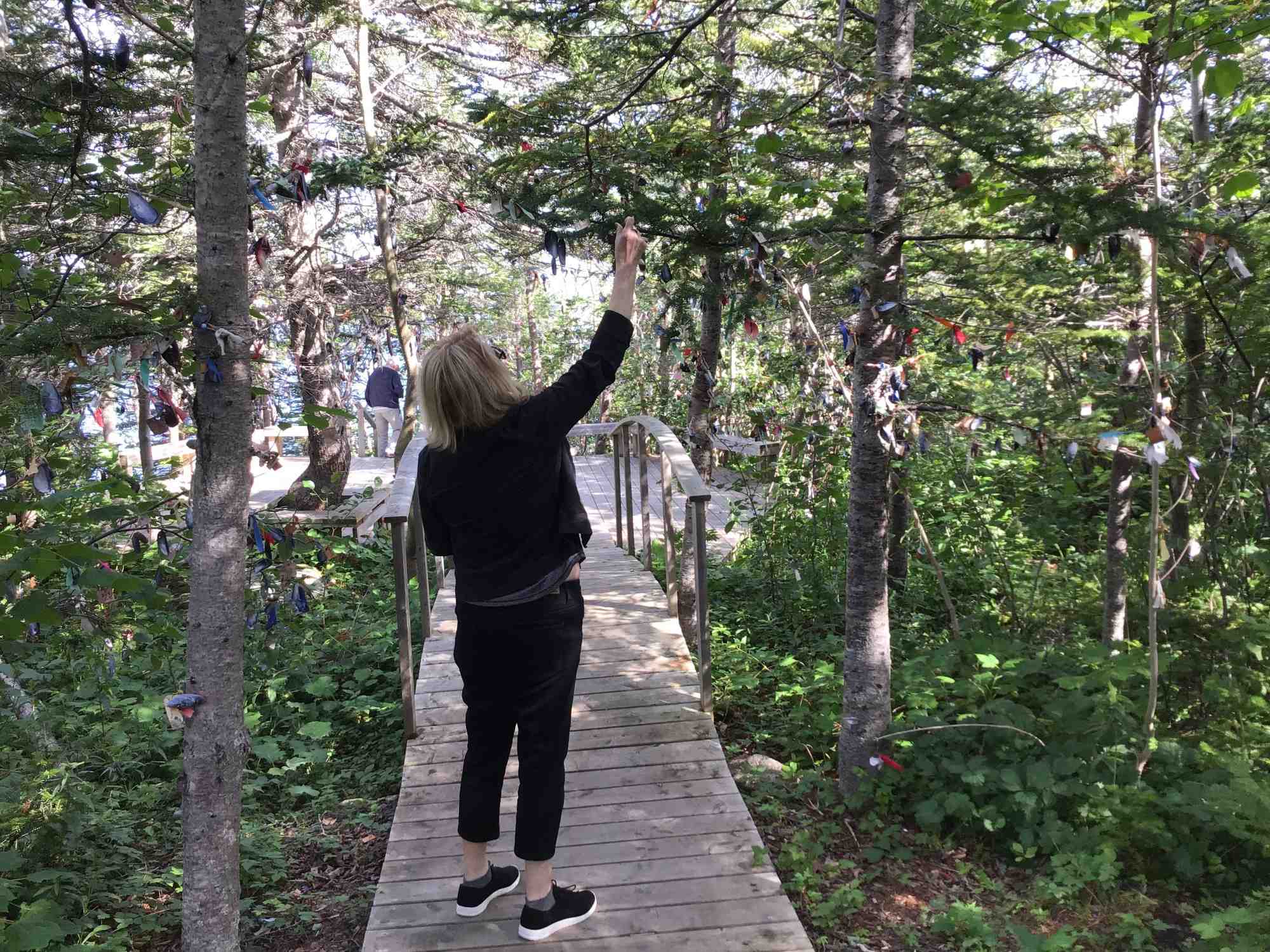 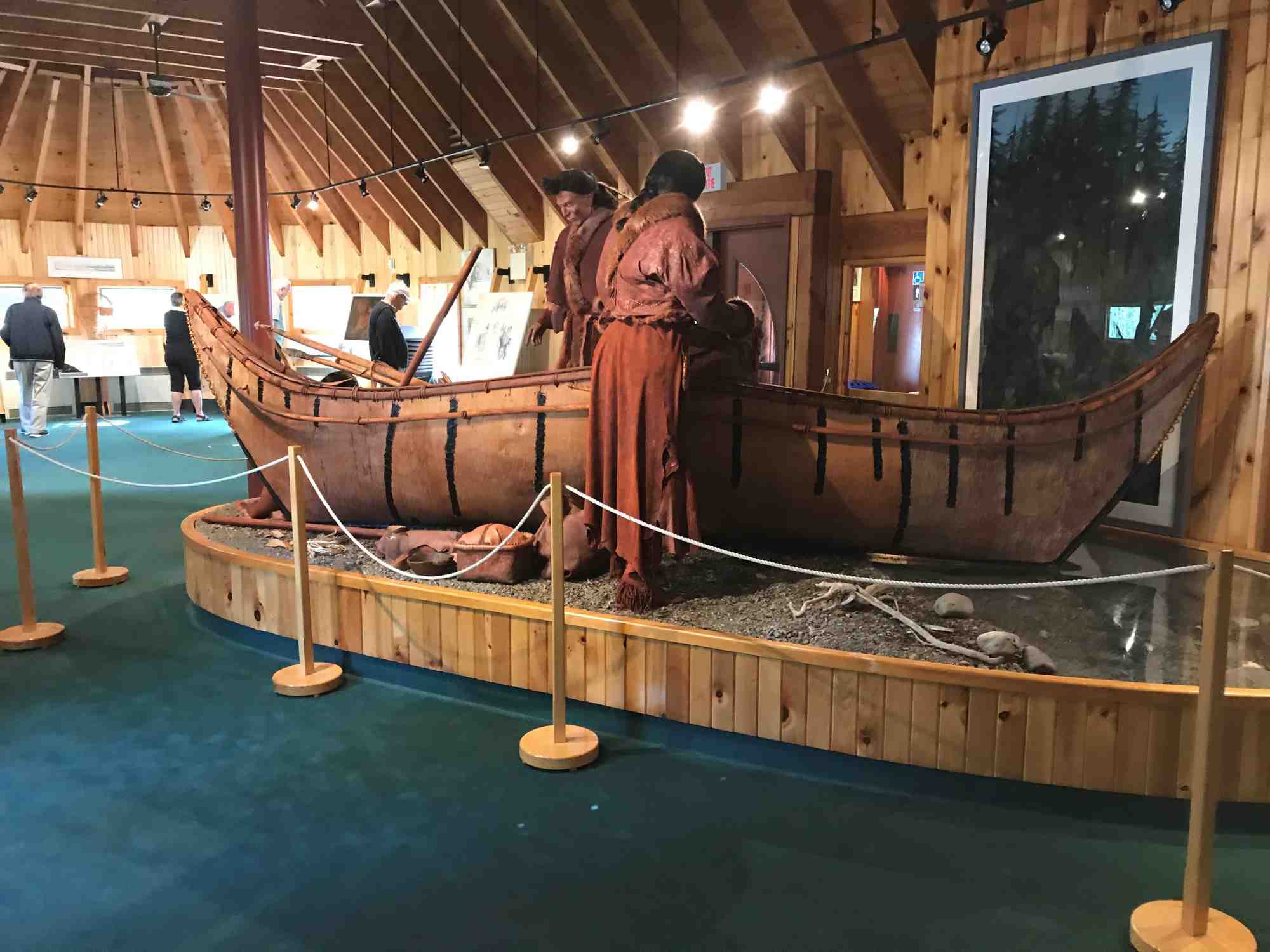 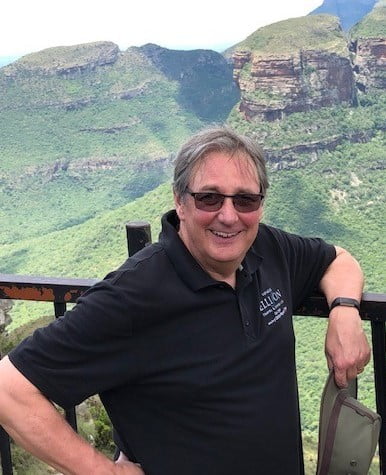 Don MumfordBusiness Development
Post Views: 442
Sign-up for our exclusive Vacation Newsletter - Just Ask Ellison
Subscribe to our weekly vacation deals newsletter!
DON’T MISS OUT ON OUR WEEKLY TRAVEL DEALS NEWSLETTER!
JUST ASK ELLISON
Be the first to get latest updates  and the best travel deals,
delivered straight to your inbox.
Give it a try, you can unsubscribe anytime